Daniel Sturridge’s transfer to Inter is edging closer by the day, if the latest edition of Corriere dello Sport are to be believed.

On Thursday, we relayed a claim from Gazzetta dello Sport that Eder’s failed transfer to Crystal Palace was currently standing in the way of the England international moving to Milan, but that could change.

Corriere’s version of the story is that, yes, the 31-year-old staying complicates things, but it isn’t the end of the world.

Sturridge’s desire to try an adventure abroad means the offer from Premier League clubs like Newcastle and West Ham have been pushed to one side for now. 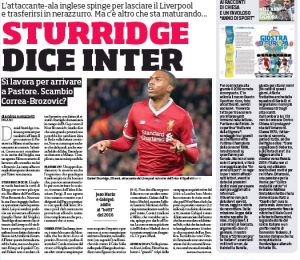 Inter and Liverpool are said to have agreed on a €2m loan deal with a view to buy at €28.5m in the summer. Even a great game from the forward against West Brom, a match in which they expect Sturridge to play, in the FA Cup is unlikely to change matters, as the Reds want rid.

This is why Corriere think that, come Monday, there’s every chance Sturridge could sign for Inter, regardless of the Eder situation.

As they put it, ‘it’s difficult, but not impossible’.