Porto’s interest in keeping Marko Grujic from Liverpool continues to be a strong rumour in the Portuguese media, and the developments in this story are starting to become interesting.

Today we see two articles about the chase. One of them is from newspaper O Jogo, who says that after the midfielder’s successful loan spell, the Dragons now battle to have him on a permanent deal.

Now with reports from England saying Liverpool would demand between €15m and €20m for the move, it’s claimed that Porto will need a ‘patience game’ to succeed in the negotiations.

O Jogo points out that Hertha Berlin are also interested in Grujic, and at least for now, the Dragons must wait until his price goes down. 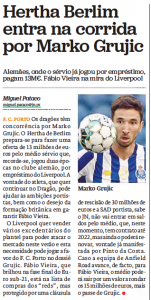 Then as Jornal de Notícias comes up with similar claims, they add that with Liverpool’s interest in Porto midfielder Fabio Vieira, a different type of deal could be reached.

The newspaper writes that 21-year-old is in the Reds’ ‘shopping list’. However, he’s protected by the Dragons with a €30m release clause and the Portuguese club don’t make any discounts.

That’s why in case Liverpool go for his signing, they could end up getting the player for €15m, as long as they include Grujic in the same deal.