Liverpool, Manchester City and Manchester United could get themselves a €40m bargain in Dayot Upamecano next summer.

That’s according to Sport BILD, who say that RB Leipzig star will be available next year due to a release clause in his contract.

The centre back was heavily linked with a move away from the German side this summer, with big clubs all around Europe all thought to be interested in his signature.

However, despite other stars leaving Leipzig for pastures new, he ended up staying and signing a new contract in July that will link him to the club until 2023.

That ended speculation about a move for now, but the newspaper says there is an understanding at the club that he will likely move next summer.

That’s because his new deal includes a €40m release clause and they believe that represents a ‘bargain’ for a player they describe as a ‘defensive jewel’.

Liverpool, Manchester City and rivals Manchester United are all named as ‘interested clubs’ for the 21-year-old.

Indeed, so convinced of a move are Leipzig they’ve already started planning ahead with the capture of Josko Gvardiol from Dinamo Zagreb, with it explained he will arrive next summer, ‘probably as a replacement’ for the Frenchman. 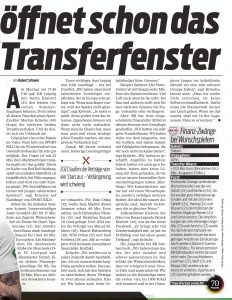 Of three named, though, it’s only likely two of them will be genuinely interested. Manchester City have already paid big money for Ruben Dias this summer, so it seems unlikely they’ll spend again next year.

Liverpool could definitely do with a new partner for Virgil van Dijk, however, while it’s been well covered that Manchester United’s defence needs a complete overhaul.

It’s easy to imagine both of them fighting it out for Upamecano next summer then, granted he enjoys another solid season in Germany.