It’s been claimed the Magpies have been sending scouts to watch the 16-year-old, and would now be keen on signing him in January.

Steve Bruce’s side would not be alone in the race, since the likes of Everton, Juventus and Southampton would be following the player as well.

Of course the Portuguese media wouldn’t stay quiet about it, and today, newspaper Record brings a piece with some interesting information about Matchoi’s situation. 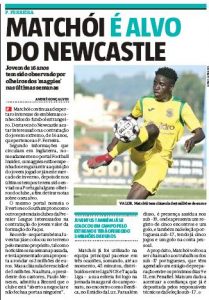 Record says that Juventus were the first to move for the teenager, having made a €3m bid for him. That’s a little below his €5m release clause.

Paços de Ferreira are not fighting hard to keep the winger. When speaking to the outlet, club president Paulo Meneses said they are ‘open to negotiate and won’t close doors to anyone’.