Home Championship Limbombe has been house-hunting in Leeds, Huddersfield and others keen on player
SHARE

Anthony Limbombe to Leeds United was a transfer rumour which wouldn’t go away the summer before last. The player’s agent spoke of interest and more than once a move to Elland Road was presented as a likely outcome.

Leeds couldn’t agree a fee with NEC and Limbombe went to Club Brugge instead. The 23 year old winger has done so well at the club that he was in Roberto Martinez’s preliminary World Cup squad.

Likely out of Leeds’ reach, Limbombe has been repeatedly linked with Huddersfield Town, and now Southampton and Newcastle are being pushed forward too.

De Standaard report he’s so serious about a potential move to the Terriers that he’s been house-hunting… around Leeds. 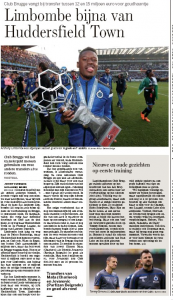 The Belgian newspaper say Limbombe is ‘on his way to Huddersfield Town’ and they believe the deal will be worth €12-15m for Club Brugge.

Huddersfield’s first offer of €8m was ‘laughed at’ and they then returned with a better deal.

Meanwhile, another Belgian newspaper, HLN, report that whilst Huddersfield have made a concrete offer, Southampton and Newcastle plan to do the same later this week.

HLN believe Limbombe would prefer a move to the Bundesliga, but English interest is stronger.