On February 18th 2020, we carried claims that Jonathan David, then playing for Gent, was attracting interest from Arsenal and Leicester City.

A week later, the player’s agent Nick Mavromaros, explained his client needed a ‘smart’ move next.

“The next step has to be a smart one, so maybe that’s too big a jump at the moment. The whole picture has to be right.

“How does the coach feel about Jonathan? How sure is he of a base place? An intermediate step might be better sometimes.”

In August, the 21-year-old signed for Lille, and he’s been doing reasonably well since making the switch to Ligue 1.

With seven goals and two assists in 22 league games so far, David has had some good recent form. In his last five matches he’s found the back of the net five times, including two goals in a match winning performance against Nantes at the weekend.

Born in New York, David moved to Canada at a young age, and that’s the team he represents internationally. At just 16, he switched to Europe and then signed for Gent, coming through the Belgium club’s youth system.

In an interview with L’Equipe, the youngster has been asked why he chose to move to Europe at such a young age, and that’s where Arsenal came into the picture.

Quoted by the French newspaper, David said: “European clubs made me dream. I 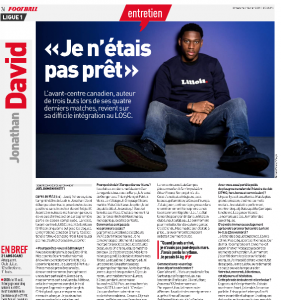 watched Barca a lot, Wenger’s Arsenal, with Thierry Henry and Patrick Vieira. I might not have been ready in my head. But that was the only option, the goal from the start. I knew there would have to be sacrifices. It was then that I met Nick Mavromaras, my agent, who had the contacts.”

Given Arsenal interest is on record, and that David is clearly fond of the Gunners, it’s worth keeping an eye on his progression at Lille this season, ahead of a potential move in the coming windows.