Back in April, Morgan Schneiderlin hinted that a return to France is something he was thinking about, admitting to beIN Sports he didn’t particularly want to play for another team in England if he left Everton.

One of the teams he mentioned was Marseille, whom he supported when he was younger, and now he’s being linked to a move to the south of France by France Football.

Whether the two are linked, we don’t know, but the French magazine this week report the Ligue 1 side are following the Everton defensive midfielder closely, whose contract at Goodison Park still has three years left on it.

However, signing Schneiderlin would only happen if one of Franck Zambo Anguissa or Morgan Sanson were to be sold, both for practical and financial reasons. 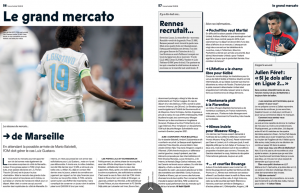 Signing from Manchester United back in 2017, the France international has yet to convince Everton fans with his performances, even if Sam Allardyce placed a large amount of trust in him during his tenure last season.

The 28-year-old made 40 appearances in all competitions during the 2017-18 campaign.