Jonathan David’s stellar performances for KAA Gent last season, which included 23 goals and 10 assists in all competitions, helped him earn a move to Lille in the last window.

Prior to joining the French club, Leeds United, Crystal Palace and Brighton & Hove Albion looked at the 20-year-old.

L’Equipe have today covered the versatile player’s start to life at the Ligue 1 club and how Lille managed to acquire his services, ahead of the Premier League trio and other suitors.

This is when Leeds and the others are mentioned. The newspaper adds Lille ‘got the ball rolling, edging out three Premier League clubs, Leeds, Crystal Palace and Brighton, among others’.

It’s claimed the Canada international was known to the big European clubs and they had followed him before he agreed to join Christophe Galtier’s side. However, none of the clubs took steps to acquire his services.

David, who is a fan of Liverpool’s Roberto Firmino, would one day like to join one of Arsenal, Chelsea, Manchester City or Everton, reports L’Equipe.

Earlier in August, the player told France Bleu Nord that Lille’s project and the opportunity to play regular football convinced him not to move to the Premier League. 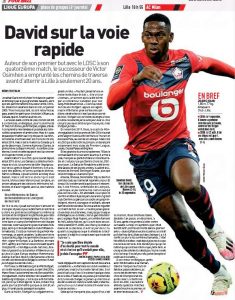 “Everyone knows the Premier League is a league of great quality, but my choice was made based on the fact I wanted to be sure to play,” David said.

“I really liked the project Luis Campos and the club’s board sold me. It’s really what encouraged me to join LOSC. Basically, I really wanted to go to a club where I knew I would continue to play to become better. Plus, at Lille, there’s a really good team with really good players and a good group.”