Newcastle United have ‘shown interest’ in signing Lyon’s Denayer, according to Tuesday’s edition of Het Nieuwsblad.

The 26-year-old joined the Ligue 1 side from Manchester City in 2018, after failing to make a single appearance for the Premier League winners’ first team during his five-year spell at the Etihad.

He signed a four-year contract with the French club and that deal is set to expire at the end of the current season. The Belgium international has not found an agreement with Lyon so far to extend their association beyond next June.

The ex-Celtic man will be free to negotiate with clubs outside of France from January 1st. Therefore, ‘several top’ European sides are already ‘sniffing’ at him and among them are the Magpies.

Newcastle were taken over by Saudi Arabia’s Public Investment Fund in October and with the help of new owners, they now have the financial muscle to carry out big deals. 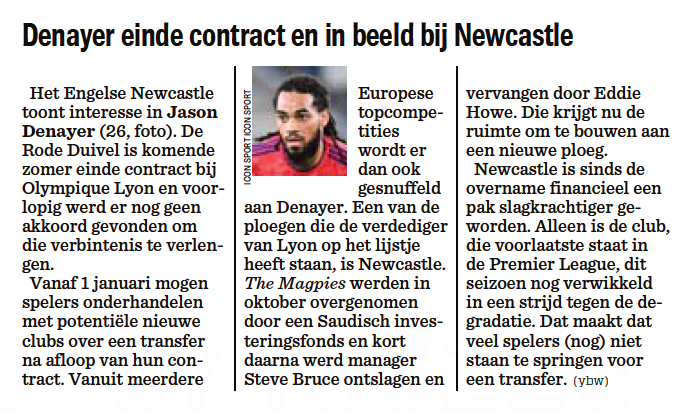 On the pitch, however, the Tyneside club have struggled this season as they are languishing in the relegation zone.

Denayer is on the English club’s transfer target list, but Het Nieuwsblad state Newcastle’s league position means that ‘many players are not [yet] eager’ to join Eddie Howe’s side.

Whether that is the case with the Belgian hasn’t been made clear by the newspaper.