Home Premier League Chelsea “All lights are green” – Claim that now is the time for...
SHARE

Kasper Schmeichel had some brilliant moments at the World Cup and will have enhanced his reputation further.

The Leicester City goalkeeper has been, albeit weakly, linked with moves to bigger clubs ever since the Foxes won the Premier League. This often causes excitement in Denmark, and they even once made a huge song and dance about a very thin link to Real Madrid.

With Schmeichel being suggested as a possibility for Chelsea, with Thibaut Courtois now expected to join Real Madrid this summer, there was always going to be a Danish slant on things.

BT newspaper have picked up comments made on Danish TV and quote former national goalkeeper, and now commentator, Peter Kjaer as explaining that now is the right time for a move: “All lights are green. I don’t think Kasper’s shares can go higher…. he has had a soaring curve culminating in the World Cup. I’m not saying it’s now or never, but at least it’s now that his stock is highest.” 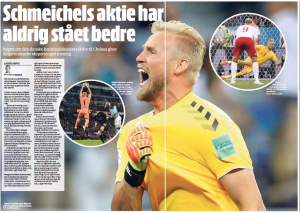 Frank Arnesen gave his opinion: “That’s a reasonable mindset from Chelsea’s side. Kasper Schmeichel is one of the best goalkeepers. He has proven this time after time in recent years. And if Chelsea lose their current goalkeeper Thibaut Courtois, then it’s a logical thought to get a really good goalkeeper who has good experience in the Premier League.”

Leicester City, of course, have a very big say in any potential exit, and with the goalkeeper on a contract until June 2021, there’s not a lot of pressure.