There wasn’t a great deal in the claims, and it felt like Sport plucking out an obvious go-to rumour ahead of the Women’s Champions League final.

Claims from L’Equipe on Friday feel like they’ve got more to them, for both Barcelona and Lyon, but also Manchester City.

The French newspaper say that during the final, Lyon will have a close eye on Lieke Martens. That’s partly because it’s believed she has the ‘X Factor’ which could decide the match, and also because they ‘would like to take the star of Euro 2017 this summer’.

Martens has a contract with Barcelona until 2020, and Lyon already ‘expressed their interest’ in January. The Catalan club want to keep their player, and her contract has a €3m buyout clause, which L’Equipe say is the highest allowed in Spain.

Lyon have ‘no intention’ of paying such an amount, but that doesn’t mean they’re giving up.

The French newspaper adds: ‘A transfer would however remain possible in the context of a possible other movement between the two clubs, in the female or male market.’ 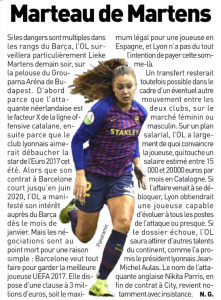 Women’s football transfers being entangled with those in the male game? It would either be hugely intriguing and provide added coverage, or open a can of worms which everyone would want to close again quickly.

It’s believed Lyon would have no such problems if it comes to convincing Martens on salary, with it being estimated she earns €15-20k per month at Barcelona.

Regardless of what happens with Martens, Lyon still plan to recruit, and L’Equipe say the option of Nikita Parris, running out of contract with Manchester City, ‘returns with insistence’.