Following on from post PSG Champions League exit coverage which spanned more than ten pages in their Wednesday edition, L’Equipe have another seven pages on Thursday.

There’s several topics discussed, and the major one is Unai Emery’s successor. Failure in the Champions League automatically means the chop, and there’s several options for the French club.

Antonio Conte takes the lead, and the second most covered option is Mauricio Pochettino.

Nasser Al-Khelaifi is said to have been studying the Pochettino option since November, and wanted to know the Tottenham manager’s philosophy and methodology.

L’Equope say Serge Aurier’s entourage were able to provide some information, with Al-Khelaifi having a good relationship with them despite the transfer.

Links between Tottenham and PSG are said to have become strong during talks for the Aurier and Lucas Moura transfers, with the suggestion that could help the French club.

It’s claimed Pini Zahavi, who worked with PSG on Neymar, has a close relationship with Daniel Levy and that could also be an advantage in any pursuit of Pochettino.

The manager is said to know Zahavi, and L’Equipe claim he had dinner with the agent in London in January. PSG director of football Antero Henrique was also there, and L’Equipe state ‘Official reason for the appointment: the case of the Brazilian Lucas’, which sounds very much wink-wink-nudge-nudge. 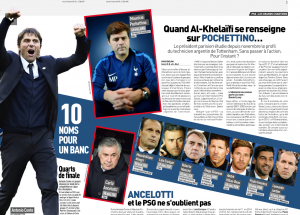 ‘No concrete steps’ have been taken, and Levy is seen as an obstacle, despite the reported Zahavi relationship.

Tottenham’s transfer hard-man would likely require a transfer fee for Poichettino, something L’Equipe point out hasn’t been done by the French club before.

There’s a list of other managers also linked, and the arrogance on behalf of PSG is palpable. There’s a reason the club ended up with Unai Emery, a good manager but not exactly one of Europe’s most wanted.