Liverpool face Ajax in the Champions League this week, and the match is inevitably getting a lot of coverage in the Dutch media.

As part of their build-up to Wednesday’s match, De Telegraaf have a big preview from Dutch football legend Ruud Gullit. He believes Ajax will find the Reds very different from previous opponents such as Real Madrid and Juventus, because of their style of play.

Whilst the Spanish club adopted a slower approach, Gullit believes Liverpool will work more on the counter-attack, and states: ‘They will not let you play football’

Ajax can’t simply rely on good football to overcome Jurgen Klopp’s side, with Gullit explaining hard work, energy and combativeness will be key.

As an example, he says ‘Let -Everton-Liverpool be a lesson’ in what can be expected from the match. That game saw Virgil van Dijk pick up an injury which could end his season and endanger his chances of playing in the Euros, but, unlike some others in the Dutch media, Gullit has gone easy on Jordan Pickford. 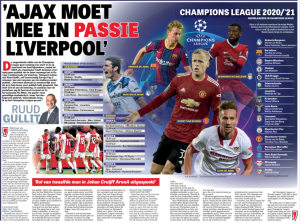 Whilst he believes the Everton goalkeeper was ‘reckless’, the former Oranje player doesn’t think there was any intent to cause injury.

Back on the tactics, there’s a suggestion Klopp is more reserved in his approach to European match than Premier League ones, and that could help Ajax.

Southampton with new chance to sign left-back as competitors have bid...