The French newspaper’s front page on Wednesday covers Zinedine Zidane’s possible next steps, and Old Trafford is presented as very much the prime destination. It gets the front page and the next two.

Managing in Spain next would be difficult for Zidane, given anything other than Barcelona, which is unlikely, would be seen as a big drop. In Italy’s it’s Juventus who would be the likeliest, but they’re fine with Allegri. In Germany, Bayern Munich have recently appointed Niko Kovac, and Zidane doesn’t have a great PSG connection.

England is therefore the first choice for Zidane, explains L’Equipe, and he’s ‘looking especially towards Manchester United’ for a job which would come before the start of next season. 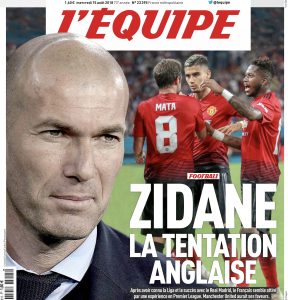 This feels light on genuine information, other than L’Equipe saying they’ve found out Zidane would look well on a move to England.