Following the disasters up front last season for West Ham, it’s been well established that a new striker is needed at the London Stadium, and it appears Slaven Bilic is scouting all around Europe to try and find his man.

Brief links to former target Michy Batshuayi appeared, while KAS Eupen’s Henry Onyekuru seemed close to signing at one point, but now it’s Sampdoria’s Luis Muriel who appears to be the man the Hammers are after. 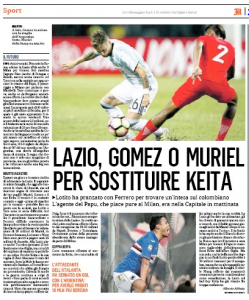 Unfortunately for them, a couple more Premier League sides are keen on the Colombian forward, as Il Messaggero report both Swansea and Leicester are also prepared to sign the Serie A striker, who has a reported release clause of €25m.

Fernando Llorente aside, the recent strikers Swansea have signed (Jordan Ayew and Borja Boston) haven’t exactly been the most prolific, suggesting Paul Clement could be keen to let at least one of them go and replace him with the Sampdoria forward.

As for Leicester, reports of an Ahmed Musa departure after a rather poor first season in England would free up a squad spot for Muriel in Craig Shakespeare’s side.

Lazio have their eye on the striker, but with their financial power smaller than that of the Premier League trio, they appear reluctant to meet Sampdoria’s demands.

In this scenario, this means West Ham, Leicester and Swansea all appear to be favourites to sign the 26-year-old, and it will be interesting to see whether he decides to stay in Italy, where he has mostly played since 2010, or try something new abroad, perhaps in the Premier League.