Leicester City are interested in a move for Southampton’s Jannik Vestergaard but may have to pay at least £25m to secure his signing.

The Foxes have been on the hunt for a central defender to add extra competition for several months after letting Harry Maguire join Manchester United in the summer.

They have been linked with centre backs since then, and according to Ekstra Bladet, the man at the top of their list is now Southampton’s Jannik Vestergaard.

The Danish newspaper make it clear this claim is their own information.

They report that manager Brendan Rodgers is ‘particularly interested’ in signing the defender, who has found himself out of favour under Ralph Hasenhüttl this season.

The defender joined Southampton in an £18m deal from Borussia Mönchengladbach in 2018, and it’s believed that the Saints would demand at least that to sanction a move to Leicester this month. 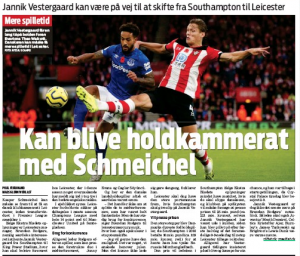 However, it is felt the South Coast club may want to try and ‘push’ the price to £25m and make a profit on the 27-year-old.

Vestergaard is not the only name on Leicester’s list, with Juventus’ Merih Demirel (currently out with a long term injury), Celtic’s Kristoffer Ajer, Burnley’s James Tarkowski and Brighton’s Lewis Dunk all possible targets too.