After losing Marvelous Nakamba to Aston Villa, Club Brugge are in the market looking for his replacement.

Over the last week, multiple reports have talked about Tottenham Hotspur’s Victor Wanyama as another target.

According to Het Nieuwsblad, the Spurs midfielder remains a priority target for Club Brugge manager Philippe Clement. The deal has still not taken shape and the Jupiler Pro League side’s boss has already admitted the potential transfer is in the hands of the Kenyan and Spurs.

The 28-year-old has not made a decision yet, which is why Clement explained his side are also looking at other targets. 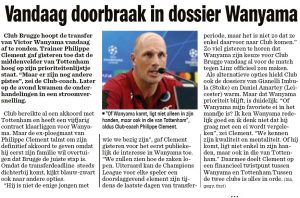 That’s when the report states Amartey and Imbula are still viewed as ‘alternative options’ for Brugge. The duo’s files are still ‘warm’ at Brugge. However, they are still behind Wanyma in the transfer list.

Meanwhile, journalist Sacha Tavolieri reported on Tuesday that Lecce have shown interest to sign Imbula on a loan deal with a view to buy.