On August 19th, we carried a report from TuttoMercatoWeb, who explained Leicester City and Aston Villa have both made an approach for Florian Thauvin.

The winger is in his final year of contract at Marseille, and after missing most of last season due to an injury, he started this campaign with a goal and two assists in his side’s 3-2 win over Brest.

Friday’s edition of L’Equipe looks into the 27-year-old’s contract situation and clubs that have shown interest in him.

With regards to the renewal, the newspaper states the Frenchman is in a comfortable position.

He and his entourage are aware they will receive ‘good salary proposals’ and a longer contract from other clubs next summer, if Thauvin is available on a free transfer.

It’s claimed some clubs have ‘already shown’ interest in Thauvin, and that’s when the Foxes get a mention, along with Atalanta, Lazio and Napoli.

Marseille chief Pablo Longoria knows the player’s entourage very well, having tried to sign Thauvin when he was at Valencia. 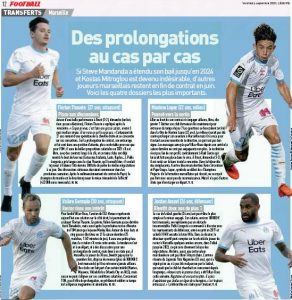 L’Equipe state it’s ‘difficult’ to discuss ‘real negotiations’ as of today, and ‘serious discussions’ are expected to begin in the coming weeks. This is more likely between the attacker and the Ligue 1 side over a  contract renewal.

Marseille need to act swiftly if they are to secure Thauvin’s long-term future, especially with the likes of Leicester and Serie A clubs chasing the former Newcastle United man.