Home Europe Leicester ‘ready to step on the accelerator’ to get deal for forward...
SHARE

Grégoire Defrel is edging ever closer to a move to Roma if the latest reports from Italy are to be believed, yet Gazzetta dello Sport don’t believe Leicester have given up just yet.

The line appears to be that Sassuolo’s forward could be switching clubs for around €18m (bonuses included) despite previous claims the Serie A side were holding out for €25m.

Yet, despite the move being ‘virtually concluded’, Gazzetta explain that Leicester City seem to be wanting to ‘press the accelerator’ on the deal to try and get it over the line ‘as soon as possible’.

While the interest makes sense, the Foxes should probably think about getting rid of some of the strikers they already have on their books, like Leonardo Ulloa and Ahmed Musa, both linked with moves away from the King 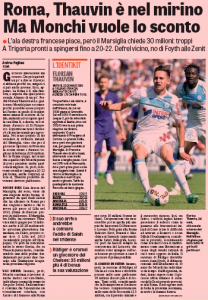 With Islam Slimani not going anywhere just yet and Jamie Vardy now likely to see out the three years remaining of his contract at Leicester, a transfer for Grégoire Defrel would see him play backup in the Premier League, much like he would at Roma with Edin Dzeko there.

It seems it’s down to the Sassuolo forward to see where he feels he’ll have a better chance of supplanting those in front of him.