With Brendan Rodgers in charge at Leicester City these days, it’s fair to say everyone involved with the club is pleased with how things are going.

The Northern Irishman arrived from Celtic midway through last season, and things have looked rosy ever since.

Not only does he play the kind of football Leicester want, his track record of developing young talent means things are looking bright at the King Power Stadium.

However, not that long ago, things were very different. While Rodgers seems to be the perfect fit, his predecessor Claude Puel was anything but.

The Frenchman was brought in to replace Craig Shakespeare but was an ill fit from day one.

His mild, quiet manner, coupled with slow, methodical football, did not fill well with Leicester, who want the complete opposite from their team and manager.

Of those who were less than impressed by Puel, Jamie Vardy ranked among the highest. 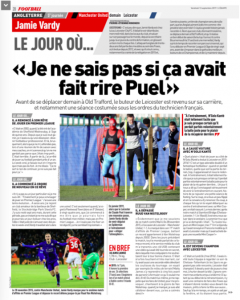 While the striker maintained a solid scoring record under the Frenchman, bagging 26 goals in 56 during Puel’s time in charge of the Foxes, it was clear to see the pair’s styles were at opposite ends of the spectrum.

And while Vardy maintains they had a good relationship, he believes it was Puel’s methods on the training pitch that caused the most significant issues.

“We got along well, but I felt that the pace of his training was too slow, to the point that it was difficult for us to be quick and aggressive in matches,” he told L’Equipe.

“Everyone who plays sports know that if you train in a certain way, you will not be able to radically change the way you compete.

“It was like preparing a marathon and the day of the match we were asked to run a 100m. It didn’t matter how hard we trained, it did not work, and it was frustrating.”