Earlier today, we carried a report from AS, who claimed Villarreal are keen on signing Vicente Iborra in the winter market, but the operation will be complicated because it will not be easy negotiating with Leicester City.

Wednesday’s edition of El Periodico Mediterraneo also mentions it will be difficult for the Yellow Submarine to secure the defensive midfielder’s services, who is their ‘number one goal’ in January.

They provide more details as it’s claimed the Premier League outfit, who paid around €15m to Sevilla for the Spaniard, are looking for a similar fee to part ways with him.

The asking price, coupled with his wages makes the operation impossible for the La Liga side, which is why they are hoping to take him on loan with an option to sign him for €8-€10m.

For Villarreal to bring in new players next month, they need to allow a few of their existing squad to leave in order to complete three to four additions.

So far, negotiations with the Foxes have been difficult as the first contact between the two clubs was made in August. 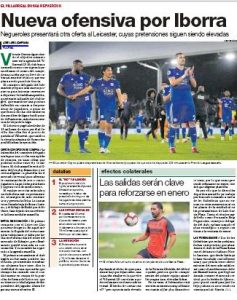 The report says the Spanish club’s chief is preparing to make a new offer so that he can convince Leicester to part ways with Iborra, even though there is no need for the English club to sanction his sale in January.

Whether Villarreal can convince Leicester to let Iborra leave is to be seen.