Leicester City are keen on signing Wesley Fofana before the window closes on October 5th.

The Foxes’ first offer of €25m and a second proposal worth €28.5m (including €3.5m in bonuses) were rejected by Saint-Étienne.

According to L’Equipe, the Premier League side made a ‘third offer’ on Monday, worth €32m, and it includes a 10 percent sell-on clause.

Brendan Rodgers’ side are now waiting for the Ligue 1 side to give the ‘green light’ for the transfer.

Saint-Étienne general manager of services Xavier Thuilot is working on downsizing the squad and also trying to raise funds through player sales. However, there’s only one player receiving offers, and that’s Fofana.

Leicester’s latest offer is ‘tempting’, and should the French club accept it, it will be their record sale, surpassing the €25m plus €5m bonuses Arsenal agreed to take William Saliba last summer.

The Foxes’ offers looks like a ‘jackpot’, more so if you take into account the impact of the Covid-19 crisis on the club’s finances. However, this thinking isn’t shared by everyone internally at Saint-Étienne.

Claude Puel doesn’t want to hear about the centre-back leaving until next summer, something which was agreed when the 19-year-old signed a new contract in April. 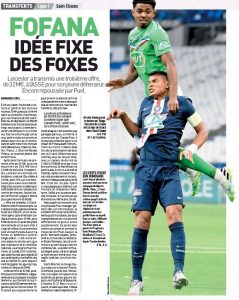 Those in charge at the French club believe Fofana could be worth more than €50m, if he has a good season.

After the meeting, the club’s management decided to go with Puel’s stance, which is to retain the player beyond the ongoing transfer window.

Therefore, they have rejected Leicester’s third offer for Fofana.