Home Europe Move to Leicester ‘shouldn’t have been part’ of player’s plans, ‘hiccup’ on...
SHARE

For some in Belgium, Youri Tielemans’ move to Leicester City is the transfer that should have never happened.

Not because the Foxes aren’t good enough for him, but because it wasn’t part of the plan.

Late in the January transfer window, Leicester City and Monaco decided to offload each other’s unwanted midfielders on one another, as both Tielemans and Adrien Silva swapped clubs on loan.

The Portuguese midfielder wasn’t a part of Claude Puel’s plans, while the Belgian and newly reappointed manager Leonardo Jardim, who likes the former Sporting CP star, didn’t get along.

With the swap now complete, France Football took a look at how the move came about. According to his agent, Peter Smeets, the decision to swap the principality for Leicester shows how determined his client is.

He said: “When a new opportunity arises, you need to listen to it. A great player can’t be scared about making decisions. It’s a new challenge that motivates him, but he remains a Monaco player.”

However, as stated at the beginning of this very article, some see it differently, like DH journalist Christophe Franken, who still sees Tielemans the ‘greatest U23 Belgian talent’.

He explained, speaking of the Monaco spell: “It’s the first hiccup on his CV, which was perfect up until then. Leicester, a mid table club, shouldn’t have been a part of his plans, but he needed to leave.

“Now, he needs to do well in England, otherwise he could end up being seen as just a ‘talent’ forever, but everything can happen quickly.”

Considering the differences between both the new Leicester loanee and Leonardo Jardim, it’s tough to see his future there. 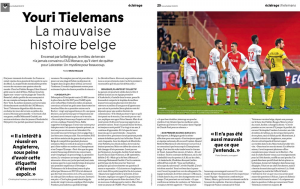 If the Portuguese manager does well and saves Monaco from relegation, he’ll likely stay on and won’t want Tielemans back.

If they get relegated (they are currently 18th), the midfielder won’t want to play in Ligue 2, and a move will have to be arranged even if Jardim gets sacked (again).

This is his time to shine, and to earn himself a new contract elsewhere.