Home Europe Leicester could be given second chance at signing after previous €40m bid...
SHARE

Leicester City could be given a second chance to sign Juventus defender Merih Demiral after seeing a €40m bid rejected for him last year.

That’s according to Corriere Dello Sport, who say Juve are willing to ‘sacrifice’ the Turkish defender if they can make a major profit on him.

The newspaper explains that Juventus are eyeing up a move for Fiorentina defender Nikola Milenkovic as Demiral’s future at the club is uncertain.

He’s the same age as the Serbian but has made it clear to the club he would like more opportunities, something he is unlikely to get straight away, if at all.

Thus a move away is looking increasingly likely, and he ‘has a market abroad’, particularly in England and Germany, where Leicester and Borussia Dortmund both saw €40m offers rejected ‘in previous last market sessions’.

Now, it’s not made clear exactly when those bids came, but it was heavily reported in January 2020 that Leicester were among those to have made such a bid, so it’s likely referring to that.

Either way, Juventus are now more open to a sale, and if a ‘significant offer’ that can make them a ‘substantial capital gain’ were to arrive, they ‘could sacrifice him’. 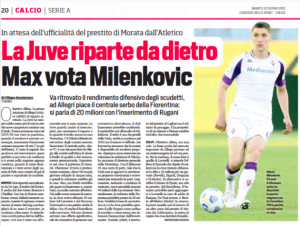 That would then open up the door for a move for Milenkovic, who was one of the names Maximiliano Allegri gave to the club on his return.

There’s no mention if Leicester or Dortmund will make a move, although it is made clear that Barcelona are eyeing a deal.

Leicester’s interest goes back a long way, though, and with there apparently being interest in Wesley Fofana, expect this rumour to pop back up again in the coming weeks.