Leicester City are willing to make a ‘strong investment’ in Philippe Coutinho this summer, but the player is focusing on other clubs first.

The Brazilian is widely expected to leave Barcelona this summer after returning from a loan spell at Bayern Munich, who have elected not to activate a purchase option in his deal.

A return to the Premier League has been heavily mooted, with numerous sources saying that is his most likely destination given the finances it will take to secure his signature.

Mundo Deportivo confirm that is the case today, reporting that there are several options in England’s top flight and Leicester are one of them.

They explain that it seems like there is no place for Coutinho at the Camp Nou and his preference is to return to England and the Premier League.

Barcelona are happy to facilitate that and value him at around €100m but understand that is a difficult price for clubs to match and so, have not discarded the possibility of loaning him out again and including a purchase option in the deal.

Indeed, that is seen as the ‘most feasible option’ although Coutinho is against it as he wants to move to a club where he will be the star player.

His representative Kia Joorabchian has made it clear to Barça he will move him to the Premier League, and there are several keen on his signature. 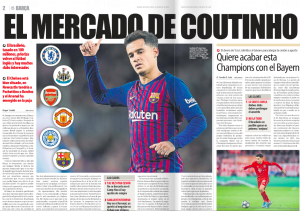 On that list are Leicester, currently managed by Brendan Rodgers, the man who established Coutinho in the Premier League during their time together at Liverpool.

They are ready to make a ‘strong investment’ to secure his signature and the relationship with Rodgers ‘plays in their favour’ although a move to the King Power does not seem to be in Coutinho’s plans.

These claims are increasingly tired, and it’s more a case of the Catalan media desperately looking around for options than anything else.