On Wednesday, there were suggestions in England Leicester City could look to backtrack on their Adrien Silva deal if FIFA won’t overturn their decision to refuse his registration.

The Portuguese press has been reporting against this possibility since the start, and that’s backed up again in a story published by Diário de Notícias on Thursday.

The newspaper claims they’ve learned Leicester City have no intention of ‘renegotiating the deal’, and considering the terms agreed between the club, Sporting aren’t thinking about it either. 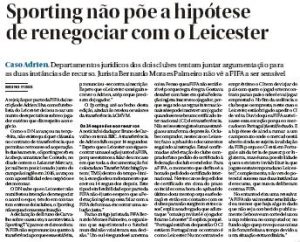 Diário de Notícias also spoke to Bernardo Moraes Palmeiro, a former FIFA employee who has been speaking to the Portuguese media about Leicester’s situation with Adrien: “FIFA won’t show sensitivity unless there is some data that is not publicly known. If there was a power outage or a computer problem, or in the background something proves that things were not done in time due to an extraordinary situation.”

The stance in Portugal is very much that Adrien Silva won’t play for Leicester City until January, won’t be going anywhere else until then, and certainly won’t be seeing his transfer collapse and returning to Sporting.