Leicester City are keen on Sporting Lisbon winger Gonzalo Plata, but face competition from fellow Premier League side Watford for his signature.

The 19-year-old right-winger has impressed for the Portuguese side this season after making the step up from their under 23 side in the summer.

They consider him one of their stars for the future, but there is already interest in his services from abroad.

That interest is chiefly coming from the Premier League and Leicester, who have been linked with his signature in the past few months and continue to be keen on him according to Record.

They are not the only side, though, with Watford also admirers of the youngster if the newspaper is to be believed.

Record report that both clubs have already ‘probed’ about the player, in other words, asked about his situation, and ‘would be willing’ to pay €15m for him this summer.

That, though, is unlikely to go down well with Sporting. They see Plata as a future star and one they can sell for a high price if they wait a couple of years. 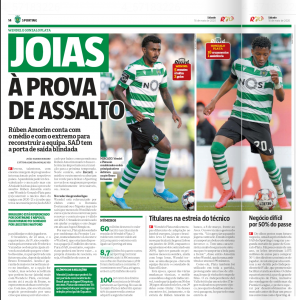 They’re eyeing up at least €60m, which is the release clause in his current contract, meaning both the Premier League sides will have to significantly up their efforts if they want him now.

That’s unlikely to be a problem for Leicester, who will be flush with Champions League cash this summer but relegation-threatened Watford may be best focusing their efforts elsewhere.