Leicester City interest in Ibai Gomez is again reported in Spain on Monday.

It’s a brief mention, with AS saying they’re one of the clubs who want him, but it’s becoming increasingly clear that the Foxes will have to move quickly for the Alaves attacker.

The Spanish newspaper are looking ahead to Alaves against Athletic Club Bilbao tonight, and they point out the latter want their former player back. That’s well known, as is Leeds United interest, with Leicester in a group not mentioned as often, along with Real Sociedad, Celta Vigo and Eibar.

Gomez’s contract expires in the summer, but with interest growing a January cut-price move is becoming likelier. Wages will certainly be a factor and of those mentioned, Leicester, being a Premier League club, would have an advantage in this regard.

That said, they can’t hang around. 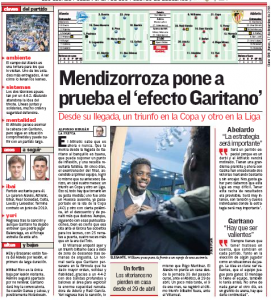 A good performance tonight is only going to up things, and make Athletic all the more determined to win the race. They have a strict Basque recruitment policy so it’s not so easy for them to move on to other targets.

Leicester have the financial muscle here, which means little unless they use it.