It seems that Islam Slimani could be returning to Portugal much sooner than expected, at least according to Tuesday’s A Bola.

Signed by Leicester City from Sporting in a €30m deal last year, the striker has been struggling to get game time, but still has a good record of goals per minute for the Foxes.

That’s why a January move is on the books, and as reported on A Bola’s front page today, his old club is monitoring the situation.

Sporting would be happy to land Slimani on a loan deal in January, considering that the player would help them a lot in the final sprint for the title race. 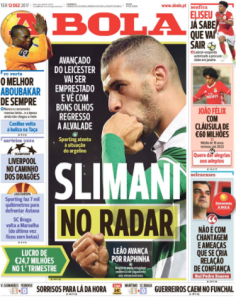 The newspaper claims Slimani wants to leave, and despite not being regular for Leicester City, he’s done enough to attract the interest from several clubs.

To sign the player, Sporting would rely on the good relationship they have with Leicester after the deals of both Slimani and Adrien Silva. There’s also the fact that the buyback clause could work for a loan deal as well.

But to see what Sporting’s chances are, we better wait for all these ‘interested clubs’ to show up. Because maybe the Foxes could end up having an attractive offer for a permanent transfer instead.

From Portugal: Wolves have agreement to sign winger, Jorge Mendes at it again

From Portugal: Wolves have agreement to sign winger, Jorge Mendes at...

Player has ‘very juicy’ offer to join Tottenham – And agents...