With Kasper Schmeichel rumoured to be on his way out of the Foxes this summer, it was claimed the Premier League side were already looking for substitutes in the market.

At the time, Record claimed that Benfica, who have other options for the position this season, would negotiate Vlachodimos’ exit for between €15m and €20m.

Since reports from France later claimed Schmeichel indeed has an agreement to join Nice, with subsequent ones pulling it back a little, Leicester City’s urge for a replacement gets hotter, and today it’s Portuguese newspaper A Bola who has something to say about the situation. 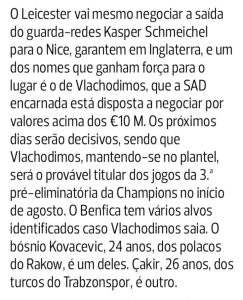 They point out that with Vlachodimos’ name gaining ‘strength’ at the Foxes, the coming days will be ‘decisive’ for the situation.

Information which should please Leicester City is that, according to A Bola, Benfica are willing to negotiate the Greek goalkeeper’s exit for just over €10m. So the 28-year-old may end up being cheaper than expected.

The Eagles have other players fighting for the position, besides some potential replacements on their agenda, so making a few million from Vlachodimos’ departure is a scenario which is seen well at the club.