Benfica right-back André Almeida has been linked to Leicester City for a couple of years now, and the Portuguese media has never let these rumours go away.

Now newspaper Record features a story with many details about the chase, claiming that the player has never left the Foxes’ radar.

The outlet claims the club’s head of recruiting Lee Congerton has ‘confided’ that Leicester City have a list of right-backs to be signed, and Almeida is in the front line.

The reason for this list is because the Foxes are already becoming prepared for a possible departure of Ricardo Pereira, who’s recently been linked to several clubs, including PSG. 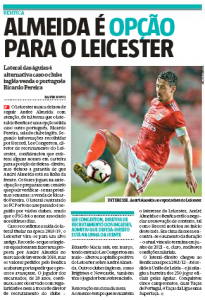 Record recalls that Leicester City thought of bidding for Almeida back in January 2018, but were stopped by the Eagles’ demands. Still, they never stopped following the player, despite the change between Eduardo Macia and Lee Congerton in the recruitment position.

Record adds Brighton and West Ham also have the player ‘well referenced’, but it doesn’t sound like they’re as keen as the Foxes.