The Danish media are very excited about Kasper Schmeichel and his performances for Leicester City. Schmeichel has fought throughout his career to prove doubters wrong and dropped down divisions only to then climb back to the very highest level.

Tasting Champions League football and doing so well in competition could lead Schmeichel to considering an exit from Leicester City in the summer, wanting again to play in European competition.

Denmark’s Ekstra Bladet have been speaking to Rob Tanner of the Leicester Mercury, and his comments have got them even more excited: “Top clubs in Europe are interested in him given how he now plays. And he is not getting any younger, so he must soon leave if he’s going to. I would not be surprised if Manchester United were interested. If David De Gea moves to Real Madrid, they lack a class goalkeeper. 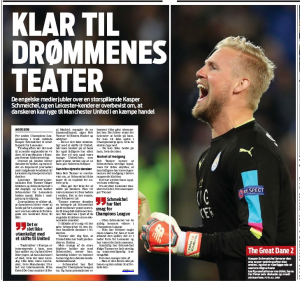 “It is not inconceivable to move to United, when you consider that his father also previously was there. There will probably be many United fans who would like to see him following in his father’s footsteps.”

Manchester United fans would almost certaintly rather keep De Gea, but Schmeichel could be one of a number of options should the Spaniard return to Madrid. Tanner told Ekstra Bladet he believes Leicester City would want around £30m for the 30 year old should he move in the next window.