This time, we don’t even have to guess who the scouts could be impressed with. Vincent Aboubakar decided the game by himself, scoring a hat-trick and getting the maximum rating from the paper.

Midfielder Danilo Pereira also excelled in Porto’s win, although all of the home side’s players ended up doing well.

But Leicester City and Southampton haven’t really been linked to any of the players on the pitch. Southampton were said to be interested in Sergio Oliveira from Porto earlier this year, but he hasn’t even played for the club this season. 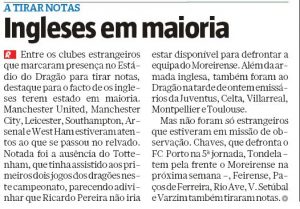 Aboubakar had been much linked to a Premier League club this year, but not serious to either Leicester or Southampton.

The striker was said to be a target for Newcastle United, when he was expected to leave the club for much less than his €50m release clause.

But things changed a lot since then, and both Aboubakar and Porto have overcome the problems they had.

Danilo would be even more expensive, with a €60m release clause. It’s actually unlikely that Porto would sell any of their important players for less than €40m these days, especially because they are all protected by huge contracts.