The Foxes had already been linked to the player during the January transfer window, when the Nigerian and English press claimed Leicester and Arsenal were following him.

Portuguese newspaper A Bola has a short paragraph today saying that both Leicester and Fenerbahce are keeping tabs on the player.

As you can see in the screenshot, they don’t have many details about the chase. They only recall the winger’s great form in the Olympics last year and say that scouts from Leicester and the Turkish side have been watching him closely.

Etebo has only one goal and one assist in 18 appearances for Feirense this season. Although 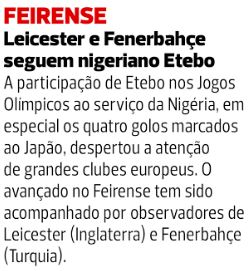 he has shown potential for the national team, there isn’t much he can do at club level as they’re on 12th place in the Portuguese League table.

As the player’s contract expires in 2018, maybe the summer market will be a good opportunity to get him for a good price.