Leicester City are interested in signing Sporting midfielder João Palhinha, according to claims from Portugal on Friday.

Newspaper A Bola reports that the Foxes have the player on a shortlist and are currently positioning themselves to make an offer for him.

Despite being close to leaving the Lions in a €15m deal for CSKA Moscow at the start of the season, Palhinha ended up staying in Lisbon and being an important piece in the club’s great league campaign so far.

This turnaround also means his price has considerably gone up. A Bola says that triggering his €60m release clause is the only way that guarantees his transfer now, as any other amount would need to be negotiated with Sporting. 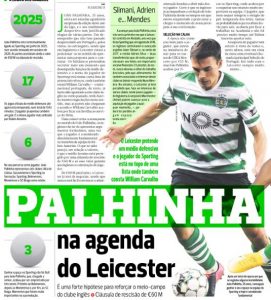 A Bola recalls that Leicester City have already negotiated the transfers of Adrien Silva and Islam Slimani with Sporting, besides being interested in the signing of Nuno Mendes as well.

Now as the Foxes have Palhinha in their sights, there’s also a former Lion on their list.

That’s William Carvalho, who currently plays for Real Bétis, and is said to be one more option for Brendan Rodgers’ midfield.