Ahead of the winter transfer window, Adrien Silva and Vicente Iborra were both repeatedly linked with moves away from Leicester City.

Iborra has been a favourite of the Spanish media, linked repeatedly with clubs including Sevilla, Villarreal and Levante.

Last week it was reported Iborra had been allowed to travel to Spain to sort out the final details of a move to Villarreal. Claude Puel denied that was the case, but gave enough hints that there was some truth in the story and a transfer could be imminent.

For Silva, the club linked has been his former side Sporting. Right from the start it was made clear the financials of such a deal would be difficult for the Lisbon club to be able to pull off. 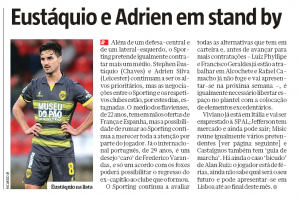 Sunday’s edition of Record says Silva is now ‘on standby’ for the move, and whilst Sporting want him there remains problems in negotiations with the Foxes.

If it’s a case of letting one or the other go for Leicester, Iborra looks likelier at this stage… there’s not a lot of confidence right now from Portugal.