Islam Slimani has been linked to a return to Sporting since the first day he stepped outside of Alvalade back in 2016, and things aren’t different this summer.

Portuguese newspaper Record brings a story today talking about the possibility of the Leicester City striker joining the Lions on a loan deal.

Since Sporting are finalising the sale of Bas Dost to Eintracht Frankfurt, they are about to need a new centre forward, and Slimani is one of the first to be linked.

Record says he’s not a priority target, but since his agents are looking for a way out of Leicester City, he ends up being an option. 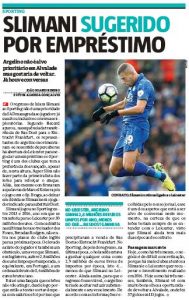 Brendan Rodgers has already made it clear Slimani is not in his plans for the season, and now he’s being offered to a few clubs, with the Lions included.

But besides a deal between the clubs, Slimani would also have to accept a big pay cut to rejoin Sporting, since they are trying to lower their payroll.

Manager Marcel Keizer was asked about Slimani after Sunday’s game, and said: ”Dost is a special striker, he has scored many goals, so replacing such a striker is very difficult. We have always found new players and so I believe we will find again.

“I know Slimani, he was very good here, he scored a lot of goals, he is really tall and we can use him as a reference, always throw the balls at him. I don’t know yet if he will be the right player for Sporting at this point. But if one striker leaves, we have to look for another. And he will have to come from outside the club, yes.”