Leicester City have joined the race for Braga defender David Carmo, according to reports from the Portuguese media today.

Newspaper O Jogo is the one saying the Foxes now have him as a target for the January transfer window, and could soon open doors for a negotiation.

This interest seems to come straight from manager Brendan Rodgers, who was impressed with the player’s performance against Leicester City in the Europa League.

David Carmo only faced the Foxes once in the group stage, since he was suspended for the second match, but was still publicly praised by the Foxes boss, who claimed the player has ‘the conditions to play in the Premier League’. 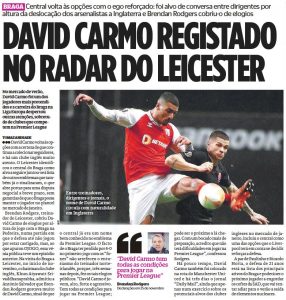 O Jogo doesn’t say how much Braga would demand for Carmo’s transfer, but they make it sound like it wouldn’t be hard to take him out of Portugal, as the Arsenalistas could ‘lose’ him in January.

The newspaper points out that the defender had been linked to Liverpool and Manchester United this season as well.