Leicester City were one of the clubs who had scouts at Porto’s cup game against Viseu last night, according to the Portuguese press.

O Jogo says the Foxes had a scout watching the Dragons 3-0 win, which gave the home side a place in the tournament’s final.

The Premier League side have watched Porto a few times this season, and that’s a pretty good reason to believe there’s something interesting them at the Portuguese club.

Not long ago, the Foxes were linked to fullback Alex Telles, and it turns out he had a great performance last night, opening the scoring from the penalty spot.

It makes sense for Leicester to have an option in mind in case Ben Chilwell leaves, and the signing of Ricardo Pereira from Porto went pretty well for them. 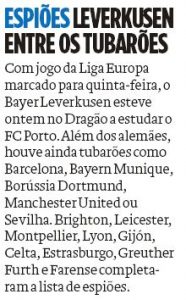 Other talents such as Zé Luís, Sérgio Oliveira, Wilson Manafá and Vitor Ferreira also had a good display, and may have caught the eyes of the Foxes’ emissary.