The season hasn’t even started yet, and scouts from Premier League clubs are already doing their jobs in Iberian countries.

This game was the Copa Iberica final, and Porto conquered the preseason title with a 2-1 win over the Spanish side.

Getafe opened the scoring with a goal from Leandro Cabrera, but Porto managed to make a comeback with Pepe and Fabio Silva. 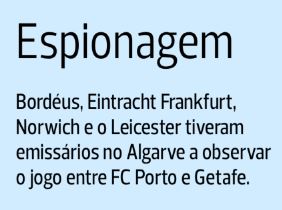 It’s always a challenge to guess who the scouts are watching during regular season games, when only three substitutions are allowed. Now imagine in a friendly, especially in this one, where 40 players had playing time.

There’s one footballer who got all the attention on this special occasion, and that was Fabio Silva. The 17-year-old had a great performance among the big boys, and scoring the winner was certainly something special for him, as he made it to O Jogo’s front page today.

But we all know how the Portuguese market works, so if Leicester or Norwich get interested in the wonderkid, they should know how hard negotiators Porto can be.