Leicester City and Newcastle United both had scouts watching Porto’s 2-1 win over Young Boys for the Europa League last night.

It’s Portuguese newspaper A Bola who reports the emissaries’ visit to the Estádio do Dragão, in a list that included over 20 clubs.

Porto’s two goals scored by Brazilian striker Tiquinho Soares, and Young Boys’ reduced the difference in the second half with a penalty converted by Jean-Pierre Nsame.

It’s been a while since the Foxes or the Magpies have been linked to a Porto player, if not for Moussa Marega, whose name has been associated to almost every Premier League club. So it’s more likely the clubs were there just to watch any potential rising star. 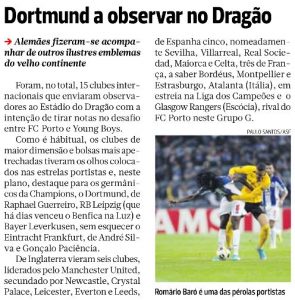 Both Leicester City and Newcastle had already scouted Benfica’s Champions League clash against RB Leipzig back on Tuesday.

That suggests the clubs are just starting a general scouting job in Portugal for the season instead of being there for anyone specific.