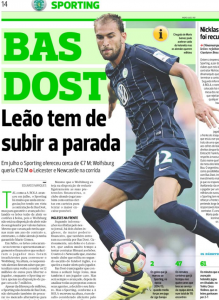 Leicester City and Newcastle United are reportedly in the race for Dutch striker Bas Dost.

As the Wolfsburg player is a target for Sporting, the Portuguese papers have been following his situation closely, but A Bola claims the English sides are ahead in the race to sign the 27-year-old.

Newcastle have apparently made the biggest offer, and Leicester are also considered to have more money for the transfer than the Portuguese club.

A Bola says that back in June, Wolfsburg were asking €12m for the striker, but all Sporting could offer was €7m.

They claim that the German side would have to drop their demands in case they want a deal with Sporting, but with the stronger English competition, this seems very unlikely.

There’s no information on how much have Newcastle or Leicester offered for the player, but from what the article says, it’s clearly more than €7m.

Bas Dost scored ten goals for Wolfsburg last season, even with a metatarsal fracture leaving him out for more than three months. As his contract with the German side expires next summer, his departure from the club shouldn’t be too difficult.