Earlier on Tuesday, we covered an article regarding Tottenham’s pursuit of a centre-back and how they had an alternative to Milan Škriniar.

This came from Il Messaggero, who reported Spurs had turned their attention to AS Roma’s Roger Ibañez, technically there on an 18 month loan from Atalanta with an obligation to buy at €10m.

Tottenham were reported to have made a €25m bid for the Brazilian, thus allowing the Serie A side to make a quick €15m profit, but that was turned down by Guido Fienga and co., who has also had to deal with an offer from Leicester City.

Brendan Rodgers’ side have made their desire for a new, young centre-back explicitly known due to their pursuit of AS Saint-Étienne’s Wesley Fofana, only to be blocked by a seemingly spiteful Claude Puel, who refuses to sell the starlet to his former club. 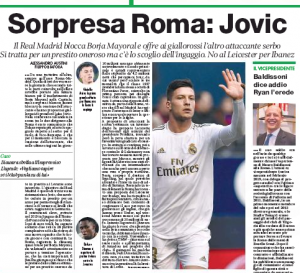 This, in turn, appears to have led Leicester to look elsewhere, which is where Ibañez comes in.

It’s Il Tempo with the report, claiming the Foxes ‘put on the table no less than €30m’ for the 21-year-old, but that bid was met with the same answer as Tottenham’s: no.

Thats because the player is ‘very happy’ to counting his career at Roma, who are themselves looking to add to their backline (see Chris Smalling) and therefore have no intention of weakening themselves any further.