The PSG player has been repeatedly linked with Barcelona in recent weeks, and has done all he can to flirt with the idea of a move.

However, PSG are standing firm so it means Verratti will have to kick and scream some more, or Barcelona will move on to other targets. If they don’t get Verratti, then Sport says Plan B is Ander Herrera and Riyad Mahrez.

Both have, albeit weakly, been linked to Barcelona earlier this summer, and this sounds like Sport, a Catalan newspaper, are trying to build a story out of not very much. 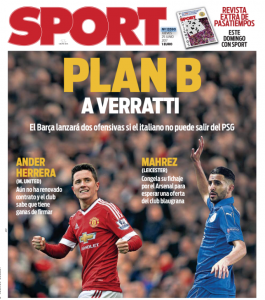 Verratti is due to return to PSG training on July 4th, and Sport say a lot will depend on what happens that day. If he skips training, which will underline his desire to join Barcelona, the club will make an offer for him. If not, then they’ll quite possible move on to trying to sign the other two targets.

Sport are encouraging Verratti not to abide by his PSG contract. To, if we boil it down, go on strike to force a Barcelona move.

The threat is that if he doesn’t, the Barcelona train may pass and move on to others. Herrera and Mahrez just seem to be props in all of this.

Signing the Manchester United and Leicester City players would in no way be the same as signing Marco Verratti, They’re all different players.