This year, we’ll be celebrating the anniversary of Leicester City’s links with André Almeida from Benfica. With the Foxes being said to be interested in the right-back since 2017, the rumour is pretty much alive two years later.

Portuguese newspaper Record brings a big story on the player today, saying the Eagles plan to offer him a contract extension in the summer.

Among the interested sides, Leicester City are the first to be mentioned. They are said to be ‘heading’ the list of clubs who have been approaching Almeida.

Record recalls that back in 2017, the Foxes’ attempt was blocked by manager Rui Vitória. And last year, the Premier League side couldn’t match Benfica’s demands. 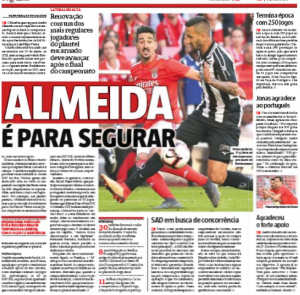 It’s worth recalling that Leicester City ended up going for the Porto right-back Ricardo Pereira last summer, and signed him on a €22m deal.

Pereira has made 35 appearances for the Foxes, some of them as a right midfielder, but most as a fullback.

Record doesn’t bring any updates on the contacts for Almeida now. All they say is that the player is ‘well quoted’ in England, since Fulham also tried to sign him back in January. So that could make his price go up as well.

André Almeida has a contract with Benfica until 2021, and is protected by a €30m release clause.