Luis Suarez finds himself right in the middle of the current Lionel Messi drama at Barcelona.

Multiple reports have said the final straw came for Messi when Suarez, his close friend, was told by Ronald Koeman that he has no future at the Camp Nou.

The player was informed on Tuesday about the situation, and whilst he’d prefer to stay where he is, Marca report there’s no shortage of offers for the Uruguayan.

Leicester City, Juventus, Ajax and MLS clubs are all ‘interested’.

The Foxes have Suarez ‘on the agenda’, despite renewing Jamie Vardy’s contract this week. There’s no more information given on Leicester interest and it doesn’t take too much cynicism to believe it’s all down to the Brendan Rodgers connection.

Rodgers managed Suarez at Liverpool, so this feels similar to the Philippe Coutinho to 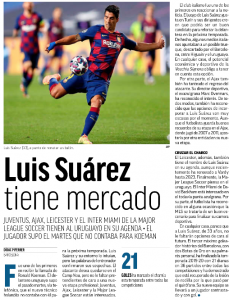 Leicester reports from earlier this summer.

At 33 years of age, and appearing to slip from his top level, Suarez would represent something of a gamble for many clubs.

Even if a transfer fee is relatively cheap, it’s unlikely his wages will be.