The Portuguese press is now finally getting involved in the links between Leicester City and William Carvalho from Real Betis.

This is a saga which has been carried by the Spanish media, with the latest updates saying the midfielder would cost around €20m.

The reason why newspaper Record has a story about it today is that the La Liga side would want Benfica’s Florentino Luís to replace Carvalho at the club.

They confirm that the Foxes are interested in signing the Portuguese international, recalling that recent claims said that Inter Milan are in the race for him as well. 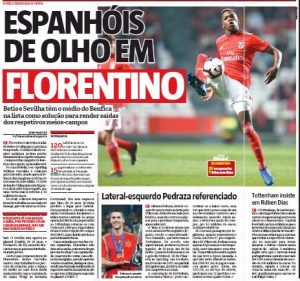 Record writes that Real Betis would make William Carvalho available, but for that to happen, they’re actually not accepting less than €30m for him.

Then only if Leicester City get Carvalho, Betis would go for Florentino. They’d have some local competition from Sevilla to sign the Benfica midfielder, who’d fancy a move to a place where he can get more minutes. He’s currently protected by a release clause of €120m