Home Europe Leicester City haven’t given up on target, will try again in the...
SHARE

It seems that Leicester City could still be interested in signing Ludogorets forward Jonathan Cafu.

As covered by us many times earlier this year, the Foxes were one of several Premier League clubs who tried to sign Cafu in January. But as no sides managed to convince Ludogorets to let the player go, it’s now time to prepare for the summer window, and there’s going to be bigger competition. 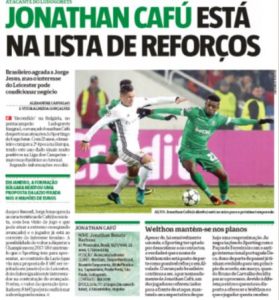 According to Portuguese newspaper Record, Sporting CP have joined the battle, and would be fighting Leicester City and Lazio for the Brazilian.

It’s pointed out that Champions League football is something only the Portuguese club could offer right now, something that would obviously favour them.

With ten goals and nine assists, Cafu is living his best season in Europe and would like to take the chance to move to a top league.

As reported by Sport Witness in January, Ludogorets’ intention was to sell the player for around €12m, but the biggest offer from England was €8m.

Leicester City will have another chance in the summer.