Home Europe Leicester City could be forced to pay further €500k for transfer, could...
SHARE

Leicester City could be paying another €500k for the transfer of Islam Slimani at the end of the season, according to updates from Portugal.

Record newspaper claims the deal between Sporting and the Foxes includes a clause which forces the English club to pay €500k every time the striker reaches 15 appearances for them.

This amount had already been paid earlier this season, as Slimani currently has 21 games. Now, with ten Premier League fixtures left plus the Champions League games, Sporting are hopeful he’ll be getting nine more matches. 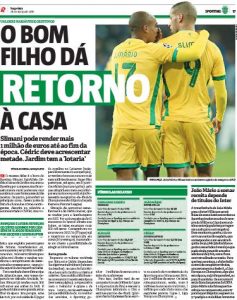 Leicester have already paid €30.5m for the transfer, and Record don’t seem to know the limits of this clause, although this could be dragged for a few seasons.

Slimani has scored only six goals for Leicester City so far, so even though the agreed bonuses could reach up to €5m, it’s unlikely that he’ll reach any scoring objectives in his first year at the club.

Should the clause go to the last couple of games of the season, and Slimani not be needed, then there’s every chance Leicester could choose to rest him and keep the €500k.