The Turkish newspaper say Fenerbahçe president Aziz Yildirim is looking to sign the player in the next window, but the ‘Claude Puel factor’ has made Leicester City favourites to land the 30 year old.

Puel has made a steady start since replacing Craig Shakespeare at Leicester City, and it’s possible the Frenchman will want to strengthen his squad by bringing in his former Nice player. Puel managed to get the best out of Ben Arfa when he was Nice coach, and  helped get the player’s career back on track after his problems at Newcastle United.

However, the Premier League side will face stiff competition from Fenerbache, and the Turkish giants have been linked with Ben Arfa in the last four transfer windows. 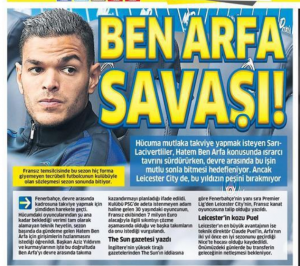 Despite the strong interest from Leicester City, at least as far as the Turkish media are concerned, Fenerbahce are understood to still be hopeful of landing Ben Arfa, if he can solve his problems with PSG.

Fanatik say Fenerbahce failed to sign Ben Arfa in the summer due to a money issue between him and the French club.

Ben Arfa to Leicester City took off in the French media even before Puel had been announced, and it’s a rumour that won’t go away… and has clearly convinced the Turkish press.